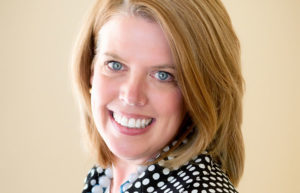 A former president of the Junior League of Greensboro, North Carolina, Stephanie Billings has been named Executive Director of Alumni Affairs at Appalachian State University. She began the role in October.

Stephanie’s dedication to service extends beyond her university commitments. She served as president of the Junior League of Greensboro from 2007 to 2008. During her tenure, the JLG acquired our headquarters on West Friendly Avenue. Stephanie expressed her gratitude for the gift from Starmount Co. saying, “Being able to own our own property would allow us to give back more to the community… That’s what makes this gift so generous.”

Stephanie continues to show her commitment to the League as a sustainer. Currently, she advises our senior leadership as a director on the Board of Directors.

Recognized for her outstanding achievements and commitment to the Greensboro community, Stephanie was named one of the Triad Business Journal’s “40 Leaders Under 40”. Before accepting the position at Appalachian State University, she worked as the director of information technology at the Greensboro Children’s Museum, a nonprofit organization that the Junior League of Greensboro helped fund.

From 2000 to 2002, Stephanie served as chief financial officer for the Girl Scouts Tarheel Triad Council. For four years prior, she operated as the director of development for the organization. In the midst of all of her achievements, she also owns the consulting firm BE Creative, which supports the marketing efforts of local companies.

When asked about her many volunteer efforts in addition to her professional accomplishments, she says, “I love to volunteer to help make Greensboro a better community.”

Please join us in congratulating Stephanie on her new role at her alma mater.

Our League is comprised of around 200 active members and over 600 sustaining members. Membership is open to women of all races, religions, and national origins who share in our commitment to voluntarism.