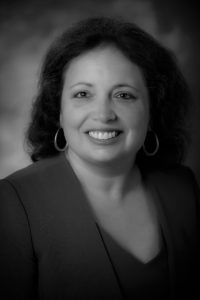 Junior League of Greensboro member Karlene Jennings was recently appointed to the National Library Association’s Philanthropy Advisory Group. Karlene will serve for two terms, where she will advance fundraising efforts in support of the association’s mission.

“The American Library Association has nearly 60,000 members and represents all these libraries in the U.S.,” she says. “So our goal is to undergird the financial support for the association and for its core mission of serving libraries and those who use libraries.”

Karlene believes that libraries are meant to serve their communities. She loves to read, but that isn’t the only thing that attracted her to library fundraising. “Libraries are so much more than just reading. They’re community spaces and makers spaces. Whether it’s an academic library or a public library, to me the importance of moving it forward is this is where people can dream and hope and discover.”

No stranger to dreaming, Karlene grew up reading the choose your own adventure books. When it comes to her career, she says she has chosen her own. She currently works as the executive director of development for university libraries at UNCG. She obtained her master’s degree in information sciences from the University of Tennessee – Knoxville after earning her Ph.D. in educational leadership and policy studies from Iowa State University.

Attaining a master’s degree after a Ph.D. is not the norm. However, she went back to school for information sciences to support library development. She believes libraries serve a critical need in communities above and beyond providing books. “Collection is one part of the library,” she says, “but services is a whole other part and space is another part.” To her, libraries are great equalizers, offering access to information, services, and space. Libraries serve their communities.

Karlene’s dedication to the community extends to her service in The League. Initially joining the Junior League of Wilmington, North Carolina, she has remained a member since 1999 and throughout moves to Des Moines, Iowa; Hampton Roads, Virginia; and later Greensboro, North Carolina. She has worked on a 50th anniversary commemoration event, a Nominating Committee, and a project to help children who were victims of abuse.

The League is “about putting on work gloves and rolling up our sleeves,” she says. She loves that the Junior League of Greensboro has a diverse membership and can-do attitude. The Women to Watch series particularly sti

cks out in her mind as a great example of how we strengthen members’ leadership skills. “Developing women’s leadership abilities and strengths, that’s important for advancing our society and The League has been doing that for many years.”

Beyond her championing of li

braries and The League, Karlene is a traveler, shopper, die-hard Chicago Cubs fan, and cheerleader of the statistically improbable. She has additional degrees from the University of South Carolina and Washington and Lee University. A Certified Fund Raising Executive (CFRE), she also holds memberships in the Council for Advancement and Support of Education (CASE) and the Association of Fundraising Professionals (AFP). She sees her own life as an adventure.

We are thrilled that Karlene chose to become a member of The League. Please join us in congratulating her on her achievements.

Our League is comprised of around 200 active members and over 600 sustaining members. Membership is open to women of all races, religions, and national origins who share in our commitment to voluntarism.